AN INTERVIEW WITH  chris white 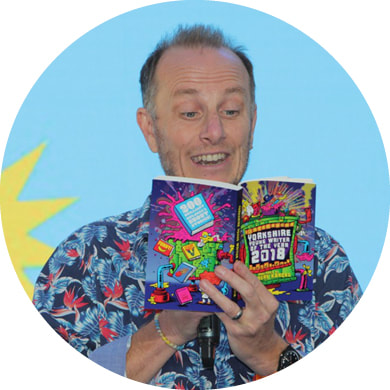 I’ve been a poet and illustrator for the last 20 years, since my first effort ‘Bitey the Veggie Vampire’ came out in 2000. Since then I’ve had another 12 (I think!) books published and I’m often zipping round the world to do school visits and festival appearances to promote the joy of being creative. It’s been fun!

Was your creativity affected in anyway during the lockdown? Did being lockdown make you feel inspired or deflated?
Both! Many days I’ve found that the creative juices have been really flowing, I mean, how can you not react to the situation we find ourselves in? Some days though I’ve found myself wanting to write about anything but viruses, governments and hand-washing and retreated into writing happy, silly stuff. Then, there have been other days of thinking ‘What’s the point?’ and not getting out of bed at all. A real roller coaster of emotions. I guess it’s been like that for most of us though.

Was it therapeutic doing creative work during lockdown?
Yes, very. All the frustrations and concerns that the little voice in my head feels, you can get them down on paper and it feels much better. Even if I never show those thoughts to anyone, it’s still a big help to get them out of my head.

How did you occupy your time?
Writing, drawing, running and watching an awful lot of films. Oh, and lots of reading too. Plus, the garden is looking goooood!

What was the main thinking behind your poem submitted to Together Behind Four Walls ?
I had found myself writing a lot of darker poems, or very critical ones, and wanted to write something short, sweet, and a bit more optimistic.

Well, most of my poems are children’s poems, so, with visiting a lot of schools, I can get lots of inspiration from what kids say or do. Apart from that, it’s mostly the strange thoughts that just pop in my head. You know the ones...

Do you have any favourite poems, from all the poems you have written?
My poem ‘Don’t put Dave in the Microwave’. A cautionary tale of trying to dry ones hamster off in a kitchen appliance. I get asked to read that one a lot!


Do you ever think of poems before going to sleep or just after waking up?
All the time. I don’t sleep much!

Do you hand write poems or go directly on to your computer?
Hand written all the time. Then type them up afterwards if they turn out ok.


Do you ever give up on poems you have started?
Not so much ‘give up’, more ‘shelve for a bit’ until they are ready to get better.


Do you do any other creative activities?
Drawing, modelling, painting. All the good stuff.


Do you only focus on poetry or do you also write prose?
Poetry, prose, shopping lists...you name it...


Do your poems ever have strong messages?

Yep. Be yourself, never give up, fly your freak flag, enjoy yourself...


How would you describe the tone of your poems?
They’ve been described as ‘joyful’ so I’ll take that!


If you had to write a poem about yourself, how would it start?

‘This is the hardest poem I’ve had to write...’