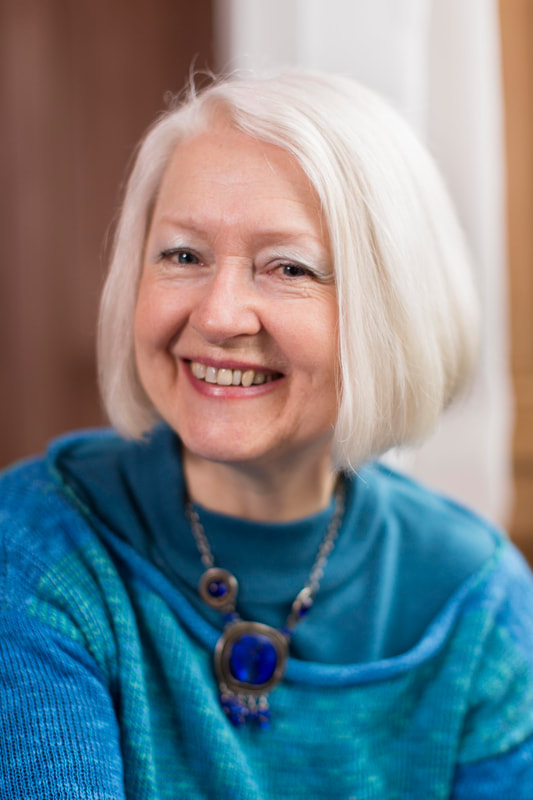 My name is Christine De Luca – well it’s my husband’s surname.  (Mine was Pearson.)  I was born and brought up in Shetland but have lived in Edinburgh since student days.  My upbringing was bi-lingual, Shetlandic and English.  I’ve always loved poetry but didn’t really start writing until I was about 30.  Working in education was full time and, combined with family life, didn’t leave a lot of time for writing.  I have found retirement to be a kind of bliss; and lockdown for me has been something of a luxury, time-wise.  I thought I was a social extrovert but have discovered another self; one quite content to cross out all those commitments in a busy diary.
I’ve had seven collections of poetry published (with poems written in English and often in Shetlandic) plus five bi-linguals (French, Italian, Icelandic, Norwegian and, more recently, an English one).

I had been wanting to write a second novel for about seven years (having done some research on 18th century Shetland) but just never seemed to have time, energy or commitment.  So when lockdown came I realised that, if I did not take advantage of the enforced social isolation, I would never write it.  There were two further personal ‘blocks’ to getting started: I knew that while I could write the narrative in English, much of the dialogue needed to be in authentic Shetlandic, which would be a significant barrier to publication;
and also I just couldn’t face opening up the huge file of research notes and finding my way into the detail.  I decided just to jump in and hope for the best.
So yes, I was inspired, but in a different genre.  Poetry sadly went off somewhere and has still not returned.  That happened with my first novel too, so I have learned not to be too concerned.  Something will probably jump-start it again.

It was immensely therapeutic.  My new friends were my characters.  We spent a lot of time together getting to know each other.   It was vicariously pleasurable.

How did you occupy your time?

Unlike writing a poem, which I find tends to drift into my consciousness, generally unbidden – and which then develops in fits and starts, jumping off at tangents – I find writing sustained narrative somewhat the opposite, requiring concentration and some unbroken time.  I generally wrote every day, 1000-2000 words, and completed a first draft of c 85,000 words in seven weeks.
So that gave a structure to my day with some writing in the morning and editing / more writing in the afternoon.   I generally had a walk every afternoon.  Evenings were cooking and relaxing.

What was the main thinking behind your poem submitted to Together Behind Four Walls?

As I mentioned, I wrote very few poems during lockdown.  However, as I passed through the huge empty car park (attached to Edinburgh’s main swimming pool) on one of my afternoon walks, I was stopped in my track by the family scene described in the short poem The Daily Ration.  They didn’t know I was observing them.  The older sibling had leant her unicycle against a post and was happily doing her own thing with a football while the young brother was learning the skills of unicycling with his dad.  It was like a tableaux; a silent embodiment of total concentration, mutual tolerance and support.  Eventually they all unicycled away home.  I thought of the benefits for most families of having dad – perhaps in relaxed mode – around a lot more.  For me this little family group was a metaphor for the routine and discipline required to get through lockdown but also the quiet delight in our daily ration of the outside world, socially-distanced.  Perhaps it also hints at the brevity of childhood and the darker possibility that some families would find difficulty maintaining that tricky balance.
But like most poems I write … I just write them and the thinking is largely subconscious.

I draw inspiration from a wide range of things: serendipitous moments; the natural world; the interplay of memory; love of place and people; theology and the spiritual life; maps and cartography; art; music … the list could go on.   I particularly enjoy collaborating with artists, musicians and also with translators.

I prefer not to remember those!  It takes a long time to develop the necessary skill, the eye, the ear; and that learning continues.

Sometimes I seem to be writing or reading out long poems in my dreams, but I can never recapture them when I awaken.  They seem impressive at the time, but were most likely drivel.

Generally now I write directly onscreen.  Occasionally I revert to pen and paper, especially if I have no access to my computer.  Strangely my writing at such times seems to differ markedly from my normal hand-writing.  Normal hand-writing for me is flowing and cursive but when drafting a poem it has always been very untidy and horrible to look at!   I’ve never understood what process is going on there but it’s as if my brain finds the process of poetic thought and the process of normal hand-writing at odds with one another.

Yes, often, but possibly not often enough.  I call them my ‘so what?’ poems.

Not so many as I used to indulge in.  I still enjoy singing in the church choir and cooking.  I’ve largely given up on baking (sadly, too many calories) and crafts.   One quickly loses the skills.

I mentioned the two novels (above).  I’ve also been involved over the years in a small cooperative which has published other poets (writing predominantly in Shetlandic) and some children’s stories in Shetlandic which I’ve written.  (Hansel Cooperative Press)

I rarely write anything polemical.

This much I know…
(It would be a very short poem!) 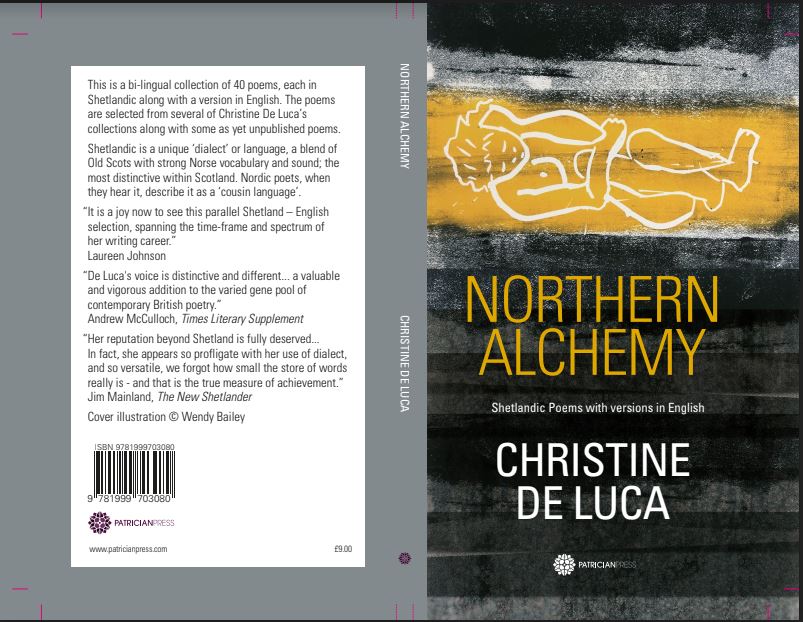