AN INTERVIEW WITH harry   Weiss-Jones. 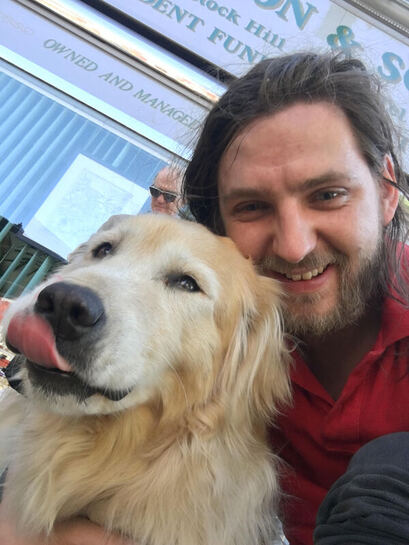 I'm Harry Weiss-Jones. equal parts pretender and poet.
This is sort of the first time in quite a while writing serious verse, at least for a purpose other than personal catharsis or to communicate the un communicatable to the odd person.
A few years ago, when I used to tour with my friends'  called Palma Violets (who are now part of the band Gently Tender, bar one who is a solo artist called Chilli Jesson but all of whom are fantastic and a far more worthwhile plug for anyone reading this than my stuff!). I sort of took on a role of self-confessed (though tongue-in-cheek) poet/philosopher/ringmaster of the band- essentially just high-minded synonyms for the lucky other one with no musical talent. This led to various verse and prose contributions as fan mail-outs, gifts, band intros etc.  It was being encouraged to put my stuff out there, by people I respected creatively, that gave enough creedence to the voice in my head that was telling me my own stuff was worth doing for more than just the personal therapeutic process.
Now I am just trying to write as much, different forms, as I can and pursue the various things I enjoy creatively whilst carving out work options that don't feel as though I am using my talents, as it were, for evil. So I am curently in the process of starting a tour business, which combines my passion for the historic and literary world and my penchant for spouting hot air with a job that doesn't leave my heart and soul battered, twisted and floored by the absurdity of  feeling I am living and working purely for consumption.


Was it therapeutic doing creative work during lockdown?


Very- especially it being a time where sort of inertia or inactivity is excused it sort of felt doubly progressive to be mustering any kind of action. Certain sides of my creativity did suffer, I am also trying to write some more comedic stuff and I have found it is almost worthless to do without bouncing off other people which allows me to really feel what is funny and not just an amusing or interesting point.


How did you occupy your time?


Walking, writing, playing guitar, trying to learn french and doing a delivery job I basically got just to be allowed outside more.


What was the main thinking behind your poem submitted to Together Behind Four Walls ?


I am not always massively conscious of intentions when writing verse and when I am it usually goes badly. But obviously mortality was a big part and the very unoriginal point of it's absurd nature, especially in the privileged lives we live here and now; that are so focused on ease/comfort, physical attainment and ambition to 'thrive' which is wrapped up in social standing, and all too often this thriving actually misses out on impedes contentment. You only have to look at the mental health/social crises affecting many of the most sort of materially wealthy nations.But these priorities,  when suddenly viewed through life and death's door, I feel have seemed sort of hollow, to quite a lot of people now, at least to some extent.
I'm not being as sanctimonious as I sound because I certainly am just as guilty of this but we have all sort of been reminded of what we want  and need most: the people we love to be safe and happy and to enjoy that happiness together anywhere, even on a a curb in the street; not instagram-able pictures of designer goods and holidays- just a room we can actually sit and laugh in together.
The sort of combination of those feelings and the fluctuations of positivity and cynicism assessment of the world can bring even at the best of times but, but in sharper focus since the pandemic, is the main thinking or rather feeling behind my piece; and from that fa spring-board to hope sort of faith in something metaphysical which, though impossible to express can be seen even by a cynic, in the pieces of magic, wonder,  contradictions to logic which abound even in the toughest of times. Faith coming from an though process that is basically Plato's 'shadows on the wall'.


Yes, still, and I still find it both heart-wrenching and hilarious (the latter it is certainly not supposed to be) and I fear will never come to a conclusion of which it is,


Often, yes, though unless in the midst of writing one very seriously or very affected by a certain phrase not always my own.
I often find lines or phrases reverberating around my head yet without even knowing or truly taking in what they mean until ages later. I think it may be how people are sort of daunted by poetry as a medium- they assume, they are supposed to, and others understand it consciously and don't. But for me it sort of hits viscerally or unconsciously first; a line just stuns me or is haunting or beautiful yet years later it comes into a literal significance.This happens occasionally with my writing too, at least the bits I like or am proud of are bits that stick in yet I don't in the moment know what it is supposed to mean exactly, more a feeling it evokes then the meaning or feeling makes sense later. SO those are the times, in bed asleep or focusing or something else, where I think about it unwillingly or, as from a line in a french song I have fallen I love with called 'Comme D'habitude (As Usual- the original version of song My Way) '' Ma main caresses tes chaveux- presque malgre moi''-My hand strokes your hair- almost against my will.''


Do you hand write poems or go directly on to your computer?


Now I usually do on the computer though it seems far less romantic and, in every other circumstance I am a staunch luddite! But a) my handwriting is truly awful. at a natural pace at least, but b) it wouldn't be so organic as my interior voice would have to slow down to meet my hand pace; thus typing gets the initial feeling or thought out straight away and put down.Then of course I double back again and again and rewrite, if necessary, more thoughtfully.


Often, though I never discard them completely. This piece, as I've mentioned, is one of the first works, in quite a while at least, that has a purpose more than pure expression or therapy or was for more than myself/ the odd person. Thus some are just exorcising demons- or paltry attempts to. Some are attempts at expressing feelings that I haven't yet even made sense of or finished feeling or recognised what they truly are,  and thus cannot be expressed that well. And some are just interminable!


I play guitar, which I had stopped for a while after feeling insincere but increase in writing and appreciation of my writing has coincided with taking it up again with actual commitment and the benefits have been inexpressible- taken the form of meditation. I have been interested lately in the concept of 'neuroplasticity' i.e. the brain's ability to reform and adapt.  Learning an instrument and meditation have been found as having a huge increase in neuroplasticity and I am far too impatient to meditate well. This obviously can have huge implications for mental health, success, confidence, mental fortitude or over-all happiness as so many of our struggles in life are rooted in routine/habit and patterns of thinking and doing.


Yes some in the form of journalistic/essay writing though was often wrought out of the chip on my shoulder that I left university very quickly so I attempt to keep up that style of writing though it is more usually for my own portfolio or to get down and properly tread the trajectory of debates or points I have in my own head though these are often not intended to or unlikely to be seen by someone until being rewritten more formally if there was an appropriate medium for them.     Usually they are sort of a pseudo-academic take on what is not usually considered an academic subject. Such as an attempted  intellectual assessment/justification for my love of football and Manchester United or why so-called 'trash tv' like Love Island or Big Brother seems to capture the imagination of the public as much as 'respectable' shows of the 'pop-cultural cannon' like The Wire and Game of Thrones; which, to me, is down to the fact that they all, in different ways, touch on archetypal aspects of our society's psyche/morality/priorities.  Admittedly the kind of things which are really unlikely to be interesting to many people outside of me but possibly, after some practice and given the right platform, could be interesting reading for the odd-fellow lunatic.


Not necessarily for me to say. I am very wary of anything too uncompromising due to the complexity and depth of human existence and feeling. I am certainly a passionate person and I would say they usually have strong sentiments which often possibly touch on messages like just caring, thinking, feeling, understanding more. But I very fervently believe in the subjective/conflicting nature of the universe; thus no matter how strongly I feel or even disagree with something the main thing I believe for certain is we should, above all, try to understand and bridge a gap or disagreement or difference rather than just cast something/someone as wrong or the enemy or hopeless. So any strong message would likely be a feeling or assertion at that time and could feasibly, in another case, be less appropriate. Everything is relative.


How would you describe the tone of your poems?


I saw this question first and have been most looking forward to it. As I had just been listening to a reading of not just one of my favourite collection of words, but favourite product of a creative impulse in any degree- TS Eliot's Love Song of J Alfred Prufrock (of which this piece of mine, as all mine are but this in particularly is, to some degree, a pale wisp of an attempted imitation of its style)- about life the universe and everything, but certainly also himself.
It begins, however, with an epigraphic quote from a piece of one of his elected Titans, Dante's Inferno. So I will begin mine with an epigraphic quote from the titanic piece of one of my literary Titans- Eliot himself - '
''Should I, after tea and cakes and ices,
Have the strength to force the moment to its crisis?
But though I have wept and fasted, wept and prayed,
Though I have seen my own head (grown slightly bald) brought in upon a platter, I am no prophet and here's no great matter;
I have seen the moment of my greatness flicker,
And I have seen the eternal footman hold my coat, and snicker.
And, in short, I was afraid."
(But if that counts as cheating then I guess the true first line would be)
Only when in fear I found I could be brave