FRANCIS H POWELL AUTHOR OF FLIGHT OF DESTINY AND OTHER STORIES 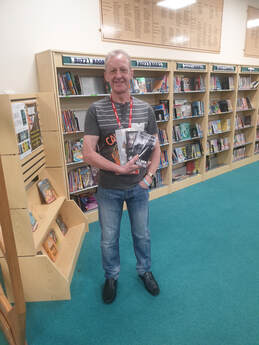 Tell everybody a little about yourself.
In a nutshell, I am an award winning Yorkshire born author whose first big break came in 1998 with the publication of Manitou Man: The World of Graham Masterton (a biographical account of Masterton's work), which was nominated for both the World and British Fantasy Awards. Since then, my writing career has been quite varied with publications covering short story collections, horror novels, stand-alone cross genre novels, and the highly acclaimed IMP series: gritty, crime fiction novels featuring detectives Gardener and Reilly, set in the West Yorkshire city of Leeds. Over the last forty years I have also spent considerable time in the music industry working both in the UK and Europe as a guitar vocalist and with a number of bands. These days I divide my time between writing books and working live on the music scene, and helping to raise money for the OPA, a charity I feel quite close to.

Was your creativity affected in any way during the lockdown? Did being lockdown make you feel inspired or deflated?
I don't think lockdown bothered me a great deal, particularly my creativity. What it did do was give me more time to write, because I couldn't sing anywhere, apart from in the shower.

Was it therapeutic doing creative work during lockdown?
I suppose, in a way, it was. It took your mind away from what was happening in the outside world. Perhaps one of the biggest advanatges of being a writer is the isolation needed to produce your work, which seemed perfect for the Covid pendemic.

How did you occupy your time?
Mostly writing, but I still rehearsed musically because I love music so much. I watched more films. I love watching films.

What was the main thinking behind your work submitted to Together Behind Four Walls ?
What inspired me to write Ranger Man was some of the horrendous stories I heard during the pandemic. I had my eyes opened to the selfishness of some people: the panic buyers in particular. I honestly believed humanity was better than that. So my story centered on the fact that you reap what you sew.

What inspires most of your work ?
I think it's mostly down to reading other people's work, and realizing how good it is. There are a number of authors who continually raise the bar with everything they write: Peter James, Phillip Margolin, Peter Lovesey, Val McDermid, and Nigel McCreery come to mind. Those people inspire to do better with my work.

Do you have any favourite stories , from all the stories  you have written?
I think that would have to be The Lord of Misrule, which was a story about a man who was obsessed with computer games. He figured there wasn't a game anywhere in the world that he couldn't beat, until he met The Lord of Misrule, and ended up inside the game - playing for real.

Do you remember the first story  you ever wrote or one of the first?
I do. It was a science fiction story about an alien invasion called Quest. It was loosely based on an old episode of The Outer Limits. You can find it in one of my short story collections: A Devil's Dozen.

Do you ever think of stories  before going to sleep or just after waking up?
I try not to, but it's not always possible. There have been nights when I had to get up, go downstairs and write the idea on some paper before I lost it.

Do you hand write stories or go directly on to your computer?
Always straight on the to the computer. I find it much easier to edit them that was as well.

Do you ever give up on stories  you have started?
I haven't done so far. There have been stories when I've taken a short break from them, until my head worked out where it should go. I really believe you should not try to force the story. If you cannot work it out, walk away and do something else. Your mind will keep working on it, and the answer will come to you out of the blue, perhaps when you least expect it. That's how it works for me.

Do your stories ever have strong messages?
​
I'm not sure they do, perhaps not deliberately. As I mentioned earlier, reaping what you sew is possibly one of the most popular themes I have used. By and large, what I love doing most is simply writing a story that I like, in the hopes that others will.

If you had to write a piece of writing about yourself, how would it start?
People often ask me, what the hell goes on inside your head?

Do you do any other creative activities?
I am a musician. I have worked live on the music circuit as a guitar/vocalist for over forty years, which is probably something I enjoy as much as writing. You'll find me working the East Coast Hotels most weekends.
​ 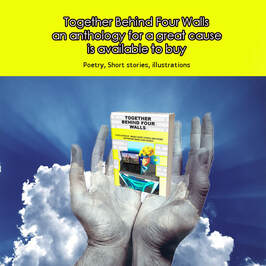 BUY TOGETHER bEHIND fOUR wALLS