AN INTERVIEW WITH marcus christopherson 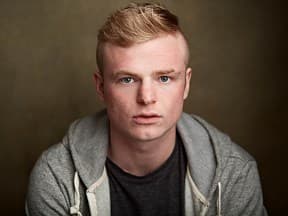 Marcus Christopherson is an actor writer and poet originally from North Yorkshire but now living in Manchester, UK. After graduating from the Academy of Live and Recorded Arts he's worked as an actor in TV, theatre and film since. Using his experience in performance he enjoys bringing his poems to life, both live and on the page.

Thankfully I don't often go too long without an idea for something or other, the problem often comes with having the time to flesh it out and let the piece breathe. Lockdown has given me this opportunity which I'm thankful for but as with everyone there have been times when the current issues facing us have sapped motivation away from me. This scraping of the bottom is often enough to refuel me however and give me even more reason to keep creating.

What was the main thinking behind your poem submitted to Together Behind Four Walls ?

Both poems were born out of sitting, thinking and looking out of the window. With either, I didn't that day go about intending to write a poem. I knew I wanted I be creative but didn't know exactly what would come out. I feel to try and describe the times we are living in, especially as we are living them is extremely difficult. Metaphors with several meanings and paradoxes that would be unbelievable a year ago probably do a better job of explaining what's going on than the news does.

I've had to start keeping a notepad next to my bed to write down any ideas that come into my head. My mind is normally most active the night before something important and I can't sleep till I I've atleast written the idea down. I'll tend to write the bare bones and work on it later though. Everybody needs there sleep.

Handwritten for everything really. Then I'll record it and read it out loud. By the time I've written it on the computer it's usually found a slightly different structure having gotten it on it's feet. I'd have done this interview hand written but my handwriting is awful. Do you ever give up on poems you have started? Yes. Most scribbles are kept for a year or two and looked over to see if there is still a spark. I'm careful about putting work behind me but if I really do feel like it's not what I want to say anymore or I can't find a way to develop it further then it can often be condemned. Do you do any other creative activities? I trained as an actor at ALRA and continue to work in TV, film and theatre. I also write and produce indie film.

I like to think so. As with most poems I think differently people will draw different messages from them but quite often there is intent in the lines I write. Having said that, I sometimes look over my own things at a later date and draw different meanings from them.

What are your links

Not particularly tech savvie but I think any links should go to Insta- @christophersonmarcus and Twitter @marchristophers Thanks again for the opportunity Francis.

I look forward to hearing more about 'Together Behind Four Walls'